On 10 August 2020, the new Law 167/2020 amending and supplementing Government Emergency Ordinance no. 137/2000 on the prevention and sanctioning of all forms of discriminations, as well as supplementing Article 6 of Law 202/2002 on equal opportunities and treatment for women and men entered into force. This new piece of legislation mainly brings amendments in the field of harassment at work, imposing severe sanctions, even for employees.

It is a good sign that the Romanian legislator is concerned with the prevention and fight against unwanted behaviours at the workplace (i.e., discrimination, harassment) in the current socio-economic context, in which most employees continue to work from home/ conduct teleworking. However, the new amendments do not solve an essential problem of the labour law in this field, respectively the tendency to overlap rules governing the same matter in several separate regulations, which often raises concrete problems of correlation and application of the overlapping rules. Moreover, the Labour Code was recently amended by Law 151/2020, which supplements the general provisions on the prohibition of discrimination and harassment in the context of employment relationships in accordance with the special legislation, bringing an element of novelty – the prohibition and sanctioning of discrimination by association which consists in discrimination against a person who does not belong to a category of persons identified according to the criteria expressly provided by law, but nonetheless is associated or presumed to be associated with one or more persons belonging to such a category.

Among others, the new law introduces a new obligation that requires employers to take preventive measures against moral harassment at work and to apply disciplinary sanctions to accountable employees; the new law also grants authorities the possibility to sanction the employer’s inaction with administrative fines. The administrative fines are substantial, mainly relative to the usual penalties applicable to misconducts in employment relations.

Is moral harassment a novelty in Romanian legislation?

Although at first glance the answer may seem affirmative, a brief analysis of the legislation shows that the legislator has already customized the sanctioning of harassment, including in the field of employment relationships, by prohibiting psychological harassment, – any inappropriate behaviour that occurs over a period of time, is repetitive or systematic and involves physical behaviour, oral or written language, gestures, or other intentional actions that could affect a person’s personality, dignity or physical or psychological integrity. This obligation was introduced in October 2015 by amending Law 202/2002.

Therefore, moral harassment was not entirely absent from Romanian legislation prior to this legislative change, but the new law will bring a special definition of moral harassment in the field of employment relations, which is not limited to one or more predetermined criteria and which also provides examples of prohibited behaviours.

Specifically, the new legal provisions define moral harassment as any behaviour manifested through hostile/ unwanted conduct, verbal comments, actions / gestures, exerted with regard to an employee by another employee who is his/her manager or a subordinate and/ or a an employee having a similar work position, in relation to employment relations, and with a purpose to deteriorate or causing a deterioration of the work conditions. Such deterioration can take the form of disturbance of work environment, including stress and physical exhaustion (the “burn-out” phenomenon), violation of the employee’s rights or dignity, damages to the employee’s physical or mental health/ integrity or jeopardizing the employees’ professional future.

What additional obligations are incumbent upon employers? What will the new sanctions be?

It will be possible for employers to be penalised much more severely if they do not stipulate in their internal regulations disciplinary sanctions against moral harassment actions conducted by the employees, as well as if the employers remain passive and do not undertake any necessary measures to prevent and combat moral harassment at work. The administrative fines start at RON 30,000 (approx. EUR 6,000) and can even reach RON 50,000 (approx. EUR 10,000).

Even now employers have the obligation to lay down rules in their internal regulations concerning compliance with the principle of non-discrimination and the removal of any form of violation of dignity. However, at present, if such rules do not exist in the internal regulations, the sanctions are lower (fines between RON 3,000 and RON 10,000 – approx. EUR 600, respectively EUR 2,000) and are only applicable for the absence of rules on the prohibition of discrimination/ harassment based on the gender criterion. Furthermore, the territorial labour inspectorates (ITM) may order employers to update their internal regulations to include the rules set out above, under the sanction of an administrative fine ranging between RON 5,000 (approx. EUR 1,000) and RON 10,000 (approx. EUR 2,000).

Moreover, the establishing by the employer, under any form, of internal rules or measures that compel, determine, or encourage employees to perpetrate moral harassment at work may be sanctioned with an administrative fine ranging between RON 50,000 (approx. EUR 10,000) and RON 200,000 (approx. EUR 40,000).

Will there be new sanctions for employees as well?

The victim’s co-workers who are guilty of moral harassment at work by violating the rights or dignity of another employee may be sanctioned with an administrative fine ranging between RON 10,000 (approx. EUR 2,000) and RON 15,000 (approx. EUR 3,000).

However, the fact that the accountable employee will be subject to disciplinary liability does not prevent administrative or criminal liability, if the case, for the respective actions.

Who will apply the sanctions?

The power to apply administrative sanctions in the field of moral harassment will be held by CNCD, while the courts of law will be authorised to resolve any claims arising from actions of moral harassment or possible complaints. If CNCD finds that a violation of the law occurred, it may order the employer to grant certain indemnities (i.e. the amounts needed for psychological counselling) to the employee.

Furthermore, pursuant to the law, the court that will establish that an act of moral harassment at work was perpetrated will be able:

Employees may claim moral damages in court. Who holds the burden of proof?

Besides administrative liability, employers may be required by the courts to cover the moral damages claimed by employees, to the extent they reach the conclusion that moral harassment was perpetrated and the employee suffered moral damages which can thus be covered. The amount of the moral damages can range between a few hundred RON to tens of thousands RON or EUR, depending on the seriousness of the situation and the consequences suffered by the employee on a moral level.

The law provides that the victim of moral harassment is the one who must prove the factual elements of the harassment. This text also seems to reiterate the current rule according to which, although the burden of proof in labour law disputes normally lies with the employer, in the matter of proving moral damages, the victim is the one who has to produce the necessary evidence that the conditions required by law to determine liability of the guilty person were met, particularly in what concerns the actions perpetrated and the damage suffered (this because the employer could not prove a negative fact, i.e. that there was no harassment). The law also states that the intention to harm through actions of moral harassment at work needs not be proven, being sufficient to produce the aforementioned effect.

What kind of facts are usually considered to be moral harassment?

Moral harassment encompasses multiple behaviours, as the new definition is very comprehensive and leaves it to the competent authorities to appreciate whether to apply the administrative sanctions or not, and respectively to the courts of law to determine whether moral harassment existed in a particular situation.

Over the years, Romanian courts considered that psychological harassment consists in those conscious, intentional behaviours, lacking an objective justification, which occur over a significant period of time and which are aimed at affecting the personality, dignity or physical or psychological integrity of employees.

Here are a few examples:

a) In a case settled by the Bucharest Court of Appeal in 2017, the employer, acting through its agents (i.e. staff with management responsibilities, the employees’ colleagues, etc.) that repeatedly accused an employee of incompetence for a long period of time, rated the employee’s performance with low ratings – although there was constant positive feedback from customers, restricted the employee’s access to work platforms, did not investigate the employee’s complaints , etc was considered to have perpetrated an act of psychological harassment. In this case, the court compelled the employer to cover moral damages amounting RON 45,000 (approx. EUR 9,000).

b) In another case settled by the Bucharest Court of Appeal in 2019, the following actions were considered to be psychological harassment: the demotion of the employee and his retention in that position, despite two final court decisions that sanctioned the illegal unilateral amendment of the type and place of work; the claiming of pecuniary liability exclusively against the employee, although there were other employees in the same situation from whom damages could be also claimed; conducting a disciplinary investigation against the employee without finally applying a disciplinary sanction; repeatedly requesting explanatory notes from the employee on certain facts without drawing a final conclusion in the end; as well as a systematic behaviour of the employer consisting in verifying the employee by using legal means, without ever reaching a concrete result and without communicating to the employee the result of the oversight performed. In this case, the court of appeal ordered the employer to cover moral damages in the amount of EUR 5,000.

Therefore, in order to find ourselves in a situation of moral harassment, based on the legislation and the case law of the courts, it results that it is necessary for a repeated behaviour of the employer to occur, while isolated facts are not sufficient, and this behaviour must lack an objective justification and must seek to harm the dignity at work and the mental integrity of the employee. It is important to note that, although at first glance certain actions may appear as legitimate (i.e. disciplinary investigations, questioning about the development of the labour activities, etc.), if they are repeated over time and no conclusion is reached, it can be deemed that the seemingly legitimate purpose in fact masks another intention –  namely to affect the dignity of the employee at work.

What remains to be done for employers. Next steps

Since the new law already entered into force, considering the severe sanctions, the employers will need to pay more attention to the prevention and combat of moral harassment actions at the workplace, as well as to analyse whether the company’s internal regulations are detailed enough and well known by the employees. Thus, the first step is to perform an audit of the internal policies.

The third step involves continuous information and training of employees to prevent these forms of discrimination and harassment. Therefore, further on, it will be of utter importance to constantly inform employees about the situations that may constitute moral harassment and the means to prevent such unwanted behaviours. Preventive measures can avoid the occurrence of unwanted situations, and in this respect training programs for people in management positions are also useful to facilitate the identification of possible harassment / discrimination behaviours at work and the resolution of such situations.

Along the same line, employers may consider creating specific internal communication channels for complaints received regarding possible acts of harassment or discrimination at work, while ensuring the confidentiality of communications and the prompt settlement of such complaints. Everyone involved in this process will need to know their responsibilities, and to clearly detail them internally will be helpful. 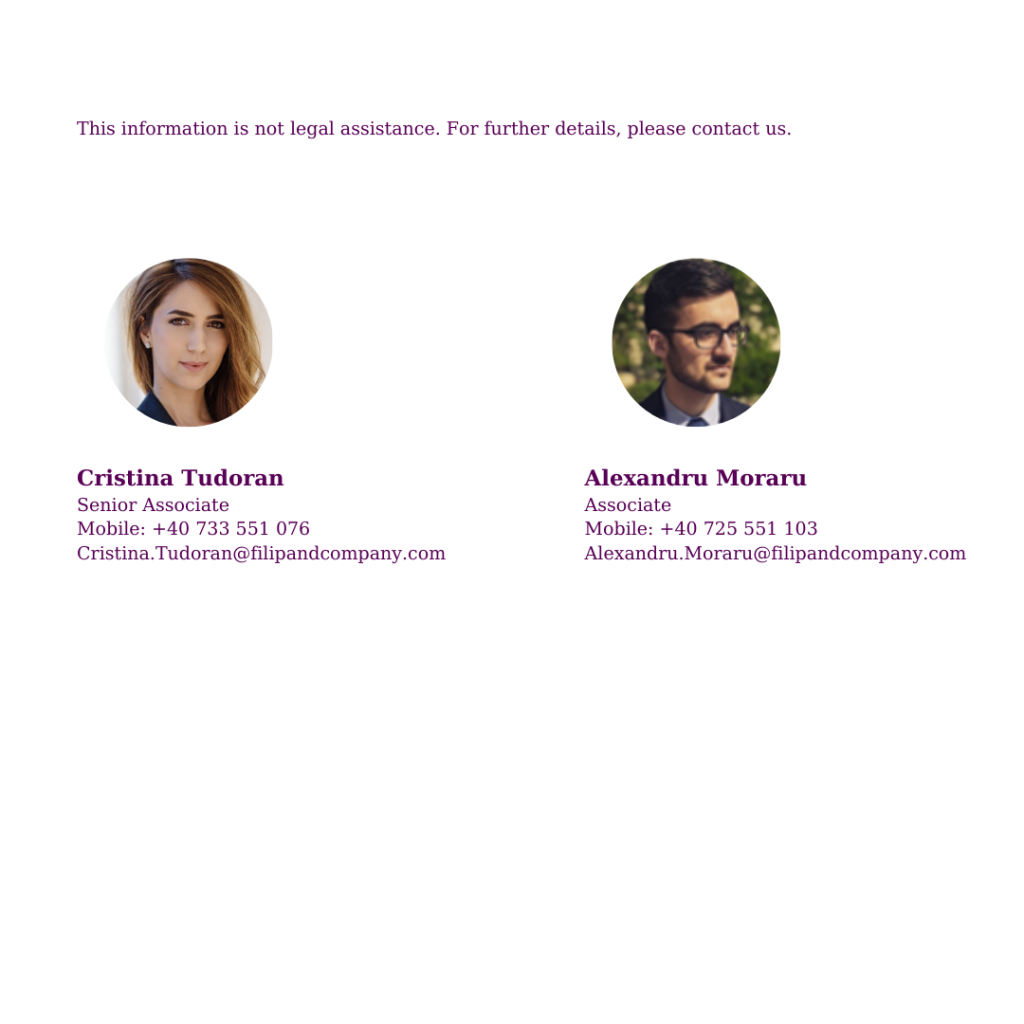 Previous Post: « Amendments in relation to the sale of extra-muros agricultural land
Next Post: New support measures for employees and employers in the context of COVID-19 »
MENU