On Monday, 10 August 2020, Emergency Ordinance no. 132/2020 on the implementation of support measures intended for employees and employers in the context of the epidemiological situation caused by the spread of SARS-CoV-2 virus, as well as on the stimulation of the employment rate, came into force. The new emergency ordinance mainly describes a national version of the Kurzarbeit model, a solution proposed in the context of the exceptional situation we find ourselves in.

1. Implementation of the Kurzarbeit model in Romania. What does the Romanian version entail and look like?

Kurzarbeit, which translates to “short-time work”, is a solution applicable in special crisis situations. It came into being in Germany more than a century ago, but only became known following its excellent results during the financial crisis of 2008-2009. While the other European countries were suffering a 3% increase in unemployment, Germany’s unemployment rate fell by almost 1% during the crisis, therefore saving more than 200.000 jobs.

The concept is a simple one, the employer unilaterally reduces working time, pays the salary for the actual working hours provided by the employee, and the state contributes with a percentage of the rest. There are advantages for all parties involved. The employee keeps his/her job and receives a salary bigger than one that he/she should have received for the reduced working time. The employer pays for the work it benefited from and keeps its chances of recovering over time. The state continues to collect taxes and social security contributions, in most cases contributing with amounts that are lower than the unemployment benefit they would otherwise have to pay in case of redundancies. On the other hand, the disadvantages include the (in)ability of the state to bear the costs on a long-term basis and the potential bureaucratic obstacles, which is an issue that has delayed the implementation of the model in several other European countries .

Employers can now reduce the working time of their employees by up to 50% for a minimum period of 5 consecutive working days, after having informed and consulted the union, the employees’ representatives, or the employees, as the case may be. At least 5 days before the application of the measure, the employer is required to communicate to the affected employees: the decision to reduce their working time, the updated work schedule, the distribution by days and their salary-related rights. The change in the working hours must be recorded in REVISAL.

The employer may employ the working time reduction subject to the following 3 cumulative criteria: (1) the temporary reduction of activity is a result of the state of emergency/alert/siege; (2) the reduction affects at least 10% of the total number of employees of the undertaking; and (3) the reduction in activity is justified by a decrease in turnover (for the month preceding the implementation of the measure or, at most, for the month before the month preceding it) by at least 10% compared to the same month of the previous year.

During the applicability of the flexible work schedule, among other restrictions, the employer will not be able:

• to conclude new employment contracts for activities identical or similar to those performed by employees whose working time was reduced;
• to subcontract activities carried out by employees whose working time was reduced;
• to reduce the working hours of the employees that fall under art. 52 para. (3) of the Labour  Code;
• to grant bonuses and/ or other additions to the basic salary of those who hold positions in the management structure;
• to allow employees under the reduction measure to perform overtime; or
• to initiate collective redundancies.

At the same time, the measure cannot be applied to the following categories of employers:
• public institutions;
• employers in bankruptcy, dissolution, liquidation or which have suspended activities; and
• employers registered in non-cooperating jurisdictions for tax purposes.

During the unilateral reduction of working hours, the indemnity that the employees will benefit from will amount to 75% of the balance between the gross basic salary under the individual employment agreement and the gross basic salary for the hours actually worked (e.g. in practice, if the working time is reduced by half, the employee is to receive 50% of the salary from the employer and 75% of the remaining half from the state) and will be paid from the unemployment insurance budget. The indemnity represents income of a salary-like nature and will be subject to taxation and social contributions.

The employer will have to pay the indemnity to the employees and will later recover the sums from the unemployment insurance budget by settlement. The settlement procedure, as well as the application period of the measure will be established at a later date by the Government.

Employers may apply simultaneously for this allowance as well as for other benefits granted by the state, but for different employees.

An employer allowing the employee to work, including teleworking or work at home in the interest of the employer, outside the reduced working hours, may be fined RON 20.000 for each person found to do such work, without exceeding a cumulated value of RON 200.000.

2. Other categories of beneficiaries

Other categories of persons may also benefit from a monthly indemnity of 41.5% of the average gross salary funded from the state budget, as provided by the Law on the Social Insurance State Budget, such as: professionals (according to the Civil Code, all those who operate an undertaking, e.g. liberal professions), as well as persons who have entered into individual labour agreements based on Law 1/2005 on the organization and functioning of cooperations – in case of a temporary reduction of their activity resulted from the state of emergency/alert/siege.

On a separate basis, until 31 December 2020, but for no more than 3 months, as the employer may choose, employees who have entered individual employment agreements for a fixed period of up to 3 months will receive part of their salary from the unemployment insurance budget, in amount of 41.5% of the salary for the days worked on these jobs, for a working time of 8 hours per day, but no more than 41.5% of the average gross salary provided by Law on the Social Insurance State Budget for 2020 and corresponding to the worked period.

3. Other categories of benefits

For conducting their activity by teleworking, employers are granted a one-time financial support of RON 2.500 for each telemployee, in order to purchase packages of technological goods and services necessary for the teleworking.

This amount will be granted until 31 December 2020, in the chronological order of the applications submitted, from the unemployment insurance budget, through ANOFM, within the limits of the allocated funds, to employers, for employees who carried out teleworking activities during the state of emergency for at least 15 working days.

Given that these are public aid-like measures, it is very likely that the competent authorities will carry out verifications. Therefore, our recommendation is that the implementation of the measures elaborated upon above be documented in a decision of the competent management/ body, which should point out that all the conditions imposed by law are met.

Our team has already drafted this type of decisions, so we remain at your disposal to adapt them and/ or to provide you with legal advice on all other issues related to this topic. 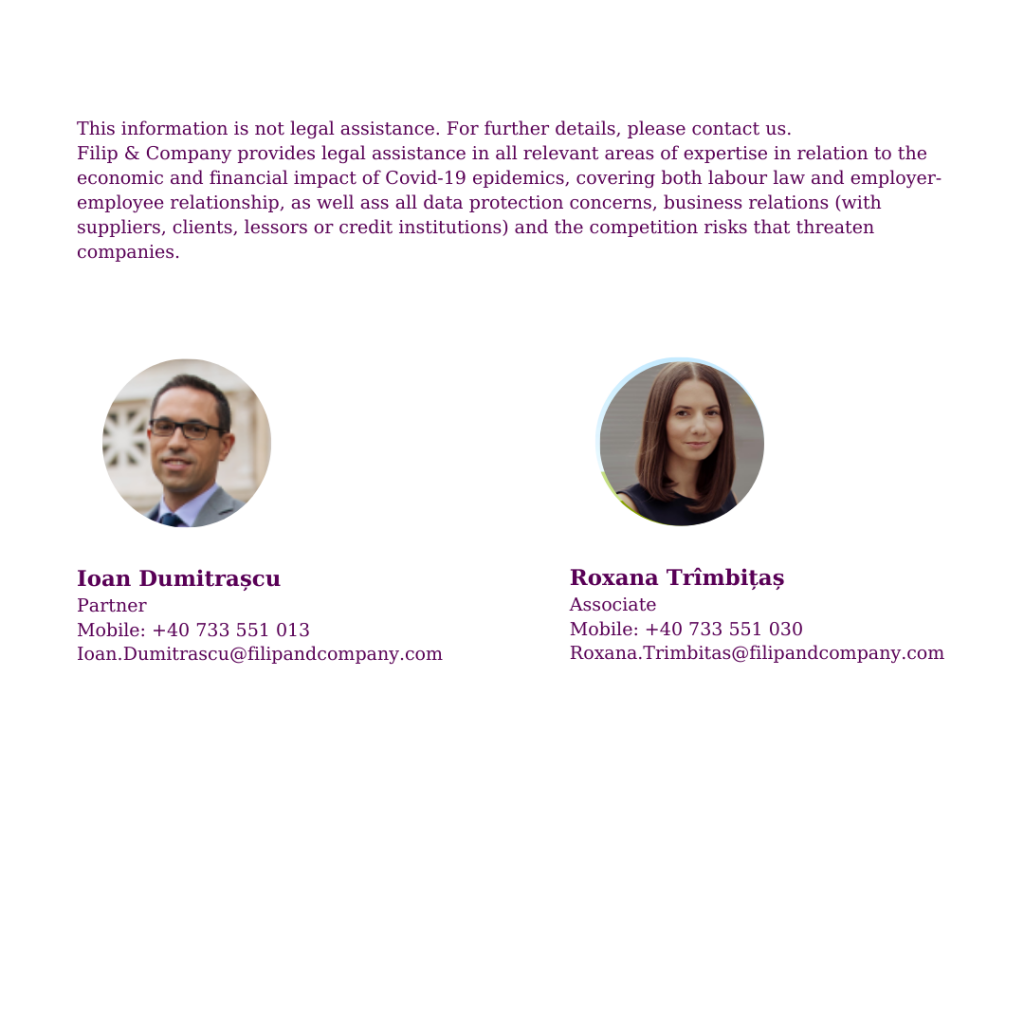