On 2 July 2020, Law no. 102/2020 amending and supplementing company Law no. 31/1990 (“Law 102/2020”), a law that has long been awaited by the business environment and highly debated during each stage of the legislative process, was published in Official Journal no. 583. Law no. 102/2020 brings significant changes to the process of setting-up a company, eliminating certain mandatory requirements under the justification of relaxing and encouraging the development of the business environment, and came into force on 5 July 2020.

Although the restriction could also be found in the legislation of other states, most of the time foreign investors were surprised by its existence in the Romanian legislative framework, especially since (i) there was no rigorous procedure that actually allowed verification of compliance with legal requirements when there were foreign shareholders, (ii) it was difficult to explain why the restrictions applied to foreign companies and (iii) no sanctions were applied. Last but not least, in practice, the two prohibitions were deprived of content through the creation of artificial structures in which control was still held by a single person, such as the establishment of a company Z with two shareholders, natural person X and company Y, X already being the sole shareholder in company Y, i.e. the very situation that this restriction was meant to avoid. Thus, the restrictions on single-member companies failed to achieve their purpose.

The main reason for opposing the removal of these prohibitions was that no effective measures have been proposed to protect the business environment against structures through which liability could be dispersed or by which additional artificial tax benefits could be obtained.

Both at EU level and in Romania, measures are taken to make the corporate structures more transparent, including by establishing the obligation to declare the beneficial owner of companies, and these represent a step forward for a cleaner business environment. However, other interventions are needed as well.

Another amendment brought by Law 102/2020 allows the number of the companies operating in a building to exceed the number of separate rooms or spaces obtained as a result of the division.

Consequently, the obligation to submit upon the establishment of a company the certificate issued by the tax body stipulating the existence of a single registered office in a certain space, and implicitly the obligation to submit a declaration on own responsibility of non-overlap, according to which the space in which several registered offices are located is delimited so as to allow the operation of several companies, are removed as well.

Another simplification results from the removal of the obligation to present the neighbours’ approval on the change of destination of collective residential buildings, in the cases where no activity will be actually carried out at the registered office located in that building, according to the statement submitted by the director or, as the case may be , the directors of the relevant company.

We consider that this change is welcome, as impediments generated by possible abusive refusals from neighbours or, as appropriate, representatives of the owners’ association in that building, are thus avoided.

As a general note, the legislative process was long, given that the draft of this law has been registered with the Senate since 2017. After its adoption in the Chamber of Deputies (the decision-making chamber), in December 2019, it was re-examined at the request of the President of Romania.

The main criticisms made by the request for re-examination referred to the consequences of removing the restrictions on the status of shareholder in a SRL with a sole shareholder, without replacing them with other mechanisms that achieve the original purpose, consequences such as preventing the transfer of activity from one company to another or the creation of separate companies for a single commercial activity, in order to obtain specific benefits, usually of a fiscal nature. Another criticism of these changes refers to the hindering of efforts to fight against tax evasion by the removal of the legislative measures that provide for the operation of companies in separate rooms or in distinctly separated spaces, by reference to the structure and usable area of the building.

By Decision no. 372 of 17 June 2020, the Constitutional Court dismissed the plea of unconstitutionality in part as inadmissible, arguing that the procedural deadlines stipulated in this respect had not been complied with, and in part as unfounded, arguing that the referral after re-examination of the law could only concern the provisions of the newly-made legislative proposal in the re-examination process, which, in this situation, only concerned provisions of a technical and administrative nature that were likely to remove an inconsistency indicated by the request for re-examination (which consisted in the fact that although the requirement to register the registered office in a distinct space was removed, at the date of authentication of, or when a certified date was given to, the articles of incorporation, the obligation to present the certificate issued by the tax bodies was still in place).

A separate opinion was also given in relation to Decision no. 372/2020 of the Constitutional Court, according to which the arguments brought for rejecting as inadmissible the plea of unconstitutionality cannot be accepted, given that the request for re-examination concerned the legislative proposal as a whole, while the re-examination by the Parliament focused only on removing the above-mentioned inconsistency. On the merits, the separate opinion states that the amendments brought contravene the obligations of the state to achieve a market economy, creating an elliptical regulatory framework, which no longer ensures the expected effects through the prohibition of an unlimited number of companies with a sole shareholder, namely economic discipline, transparency of the business environment and fight against tax evasion, objectives which are also pursued by the relevant European Union regulations, which leads to non-compliance with the constitutional provisions on the integration in the European Union, economic freedom and the economy.

In conclusion, the amendments introduced by Law no. 102/2020, namely the elimination of certain mandatory requirements imposed on entrepreneurs in the process of setting up a company, are welcome and simplify this process quite a lot. We also expected simplifications of the structures of groups of companies, generated by the elimination of intermediaries that were used to go around the restriction, which could eventually facilitate the process of identifying the beneficial owners of companies and stimulate the business environment, as it could be seen as an argument for Romanian and foreign investors to develop activities in Romania. 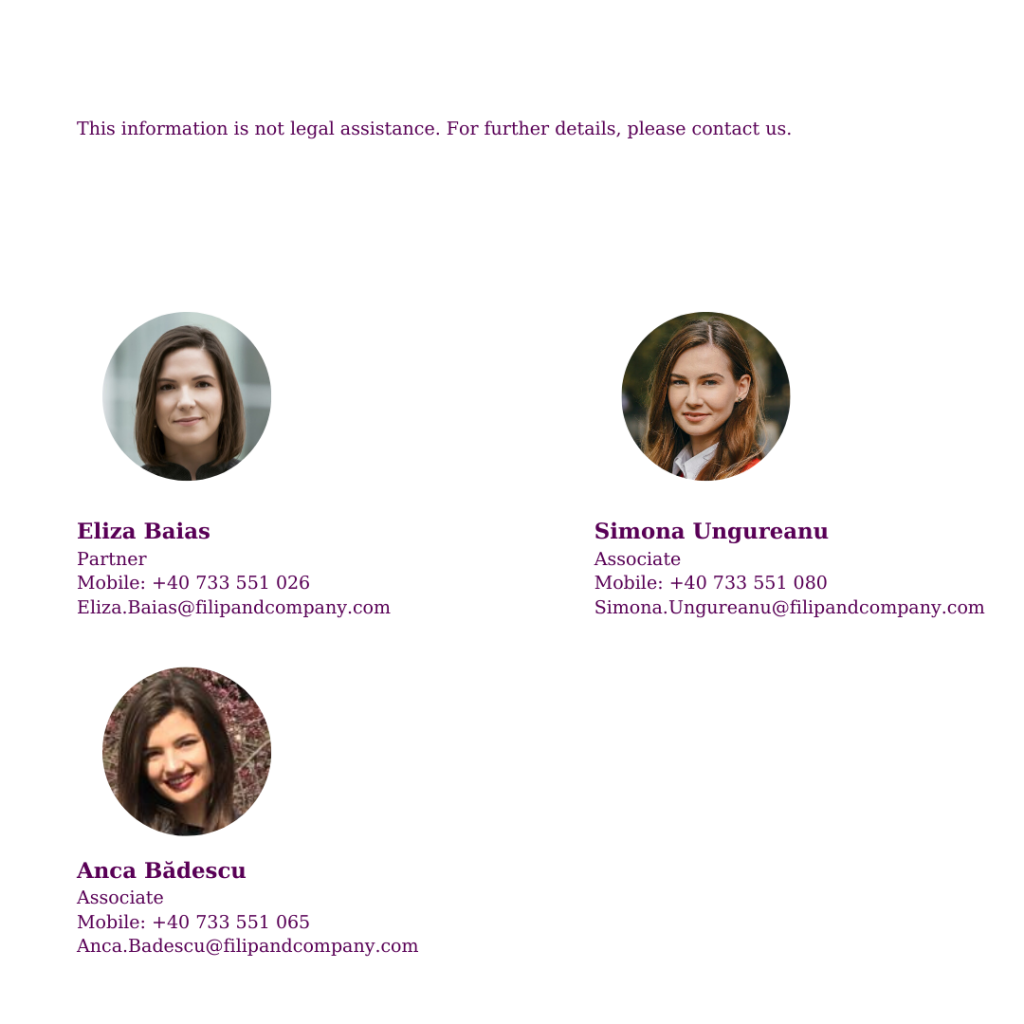